In His Own Words: Alex Campbell’s Externship at the U.S. State Department 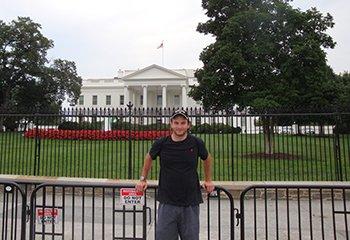 I had the privilege of spending the fall 2015 semester working for the U.S. State Department in Washington D.C. For 12 weeks I lived and worked in our nation’s capital. The University of Oklahoma gave me the opportunity to spend the semester externing with the State Department in the International Claims and Investment Disputes Division. This is the largest division in the State Department’s Legal Office. The office was responsible for representing the United States claimants in issues they encounter overseas.

During my time with the State Department, I was able to learn so much about the international arbitration process, and how the United States addresses issues when another country expropriates or takes property belonging to a U.S. National. One interesting aspect about working for the U.S. Government was the balance the State Department has to strike between the nation’s legal and policy goals. Staff meetings were always interesting because so many different events around the world could have an impact on how we handle the work we do. I was assigned many various tasks to assist the attorneys. Some involved researching documents that were hundreds of years old.

At the State Department, I was given a tour of the Treaty Room. This held every treaty the U.S. has ever been a party to. The guide hand-selected a few significant treaties for us to view. It was incredible that I got to hold in my hands documents signed by our past leaders that made a monumental difference in history. I was able to personally see the Louisiana Purchase, and the Treaty of Paris. It was incredible to see the things I learned about from history books right in front of my eyes, and that were held in the office I worked in every day.

My time in Washington was a great experience, not only because of what I learned during work, but also getting the chance to live somewhere completely different to what I am used to. My office was literally a block down the street from the National Mall, where I could see the Lincoln Memorial outside my office window. The culture in Washington was amazing. At first it was difficult to adjust to a new lifestyle for three months, but it was great because there was always something going on in the city. I had never visited our nation’s capital before, and it was amazing to see the impact the city holds on everyday life. Events around the world affected my everyday routines. It was crazy to think that when a foreign leader would come visit the U.S., it would take me 30 minutes longer to get home from work because the bus would need to circumvent his security detail.

One of the most memorable moments of my time in D.C. was when the Pope came to visit. I was fortunate enough to get tickets and see him speak to Congress on Capitol Hill. Then he came out onto the lawn and waved to all of us in the crowd. This was one of the few presentations this Pope has ever given in English and it was an honor to hear him speak. I can’t believe I was able to witness something very few people get to see in their lifetime and it was all thanks to the opportunity I was given to work for the U.S. State Department.