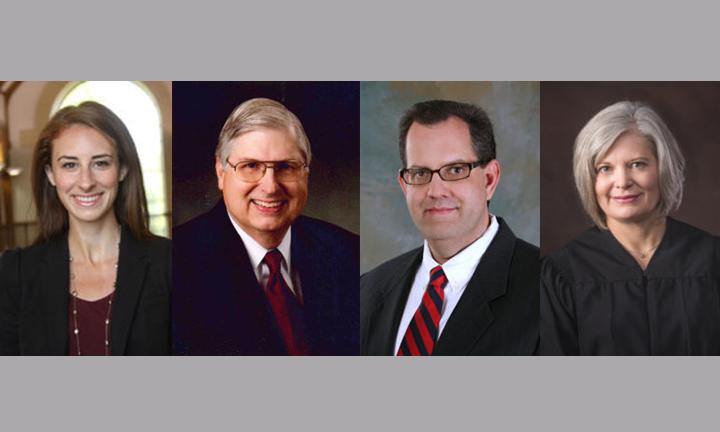 Eleanor Burg is a third-year law student at the OU College of Law. She currently serves as the managing editor of the Oklahoma Law Review and as the director of the annual 1L Moot Court Competition.

Burg is also a member of the Business Law Society and the Organization for the Advancement of Women in Law. During her second year, she served as the lead mentor to first-year students, working directly with students in the class of 2019 at the college of law.

She was the recipient of the J. Marshall Huser scholarship as well as the John B. and Elizabeth B. Cheadle scholarship for outstanding service to the law school. Burg has interned with the OU Office of Technology Development, the OU Office of Legal Counsel, McAfee & Taft and Phillips Murrah. After graduation, she will start her legal career as an associate at McAfee & Taft in Oklahoma City.

Judge Bryan C. Dixon of Oklahoma City is the 2017 recipient of the Neil E. Bogan Professionalism Award for his continued commitment to meeting high standards in the legal profession. He earned a bachelor’s degree in political science in 1974 from OU and in 1977, a J.D. from the OU College of Law. After admission to the bar he went into private practice. In 1981, he began his career on the bench as an associate municipal judge in Del City. From 1983 to 1985, he served as a special judge in District 7. He served as an Oklahoma County district judge until his retirement in September of this year.

Judge Jon K. Parsley of Guymon will receive this year’s Joe Stamper Distinguished Service Award, which honors individuals who volunteer countless hours to further the goals of the OBA. Judge Parsley was born and raised in Guymon, only moving away briefly for school. He is a 1987 Guymon High graduate. After high school, he earned a full-ride debate scholarship to Central State University.

After earning his undergraduate degree in 1991, he graduated from the OU College of Law in 1994. After being admitted to the bar, he returned to Guymon to practice with the Law Offices of David K. Petty. In 2003, he opened his own general law practice. Judge Parsley was appointed to the bench in 2014 and currently serves as the district judge of Cimarron, Texas, Beaver and Harper counties.

Judge Parsley served as chair of the OBA Young Lawyers Division in 2002 and served on the OBA Board of Governors from 2003 to 2009, including a term as OBA president in 2009. He served on the Professional Responsibility Commission, Administration of Justice Task Force, Communications Task Force, General Counsel Hiring Committee, Bench and Bar Committee, Civil Procedure Committee, Budget Committee, Long Range Planning Committee and chaired the OBA Mentorship Task Force.

As a lifelong Guymon resident, he volunteers with the local food bank and in youth sports organizations. He also served on the steering committee that led to the establishment and opening of a Legal Aid Office in Guymon to serve the panhandle counties.

Judge Jill C. Weedon of Arapaho will be honored with the 2017 Award of Judicial Excellence. Judge Weedon earned a bachelor’s degree from Colorado College in 1989 and a J.D. from the OU College of Law in 1991. Prior to serving on the bench, she worked in private practice. She began her judicial career in 1999 as a special judge and in 2009 was appointed by Gov. Brad Henry to serve as associate district judge in Custer County.

Judge Weedon is an experienced settlement judge and has served on the Washita-Custer County Drug Court since its inception. She enjoys working on the family farm and hiking. Along with a group of friends, she has summited five 14,000-foot peaks and hiked the Grand Canyon from rim to rim.

She is an attorney coach for the Clinton High School legal teams. Her teams have won two OBA Mock Trial championships and placed fourth at the National High School Mock Trial Championship in 2012.