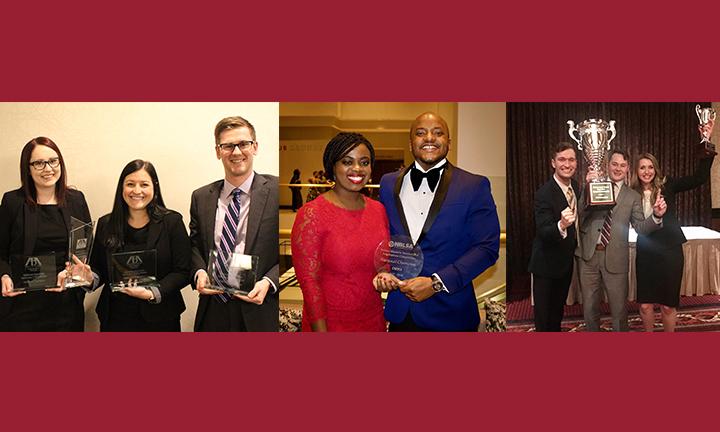 NORMAN — The University of Oklahoma College of Law finished its competition season with three national championships in 2018, solidifying OU Law as one of the top law schools in the nation for competitions and moot court.

The national tournament featuring the 24 regional winners was held in Washington, D.C. In this moot court competition, students participate in a hypothetical appeal to the United States Supreme Court. The competition problem this year concerned the application of the Americans with Disabilities Act to police interactions with residents of a group home.

In March, OU Law won the National Black Law Students Association’s Nelson Mandela International Negotiations Competition, in which participants negotiate complex cross-border issues that simulate real-world conflicts. The teams receive new confidential facts before each round and only have several hours to prepare each negotiation. In the championship round, the OU team negotiated Britain and Spain’s relationship with Catalonia. Third-year law student Isaiah Brydie was the European Union representative, and second-year student Doreen Appiah was Prime Minister Theresa May. The team was coached by OU Law alumni Chris Staine (’10) and Jonathan Brewer (’15).

These two national championships come on the heels of OU Law winning first place in the Andrews Kurth Kenyon Moot Court National Championship, a tournament reserved for the nation’s top 16 moot court programs. The OU team of third-year law students Connor Bourland, Kellie Laughlin and Ty Schoenhals was undefeated in the tournament. The team also won the award for second best brief in the competition. They were coached by Connie Smothermon, director of competitions, assistant director and assistant professor of legal research and writing, and director of externships at the OU College of Law; and OU Law alumna Lindsay Kistler (’16). In this tournament, the problem focused on the constitutionality of FEMA’s policy limiting access to relief funding to religious organizations and the application of FEMA’s policy to a religious organization after a fictional natural disaster.

“Finishing our competition season with three national championships is a fitting culmination to what has been a remarkable year for our moot court program,” said OU Law Dean Joseph Harroz Jr. “Our students’ achievements are a testament to their determination, and the faculty and alumni support we have for our competition program is incredible. We owe much of our success to our Director of Competitions, Professor Connie Smothermon, who guides and inspires our students to perform at their best.”

OU Law is ranked the No. 2 Moot Court Program in the Nation in the Blakeley Advocacy Institute’s annual rankings, a position that earned OU a spot in the Kurth tournament. For the last five years, OU Law has been ranked in the top 20 schools in the country for moot court.

In addition to its moot court recognitions, OU Law has been named a Top 10 Best Value Law School (National Jurist); is one of the Top 20 Most Innovative Law Schools in the nation (preLaw Magazine); and was recently recognized as an Apple Distinguished School for 2017-2019. Additionally, OU Law graduates achieved a 100 percent pass rate on the February 2018 bar exam for first-time exam takers, the highest in the state.

Founded in 1909, the OU College of Law is Oklahoma’s premier law school. OU Law offers small sections and class sizes that encourage a strong sense of community; accomplished faculty with international expertise; and a state-of-the-art facility equipped with the latest technology. The OU College of Law is the academic home of more than 700 students enrolled in the juris doctor program, the John B. Turner Master of Laws Program, the master of legal studies program and various dual degree programs. For more information about OU Law, visit law.ou.edu.