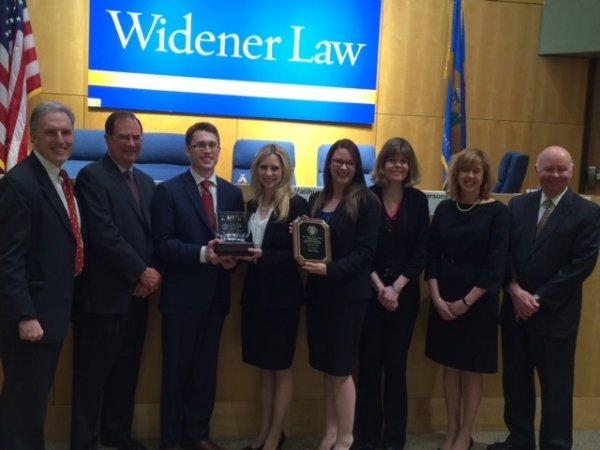 Another great round of competitions for OU Law!

David Postic, Ruthie Stevens, and Kendra Norman won first place at the Widener Corporate Law Moot Court competition in Delaware.  The team also brought home third best brief. After the first round, David learned he referenced a case authored by one of their judges.  This team was coached by Megan Shaner.

Lauren Mitcham and Jonathan Brewer won first place at the BLSA International Negotiation competition in Portland.  This unique competition provides the problem area and confidential facts to participants only a few hours before each round.  They represented Germany against U.S. automakers, Putin in the Snowden issue, and Nigeria in the Boko Haram problem.  In the final round, they were given a flashback problem negotiating elections in South Africa in 1990.  The team was assigned to represent the National Party, negotiating against a team representing Nelson Mandela.  Yes, OU won the final round of the Mandela International Negotiation Competition by defeating the team representing Mandela. Connie Smothermon coached this team with a lot of help from Erin Means.

Haleigh Collins and Kaitlyn Schrick, who won the regional ABA Client Counseling competition in February, advanced as top seed to the semi-finals, and then to the final round at nationals. They placed third in the nation at the competition in North Carolina.

The Hispanic National Bar Association moot court team of Alia Ramirez and Marcus Pacheco placed second in the nation and were awarded best brief at the competition held in San Antonio!  Daniel Nicholson has coached this competition, and given up part of his spring break, for several years.

This Veterans Day, as we honor and remember the men and women who have selflessly served their country, we recognize members of the OU Law community who have also chosen the path of military service...

The University of Oklahoma College of Law has been ranked fifth in the nation out of more than 200 law schools as a “Best Value” law school , according to National Jurist magazine. OU Law is the only Oklahoma law school in the top 10.