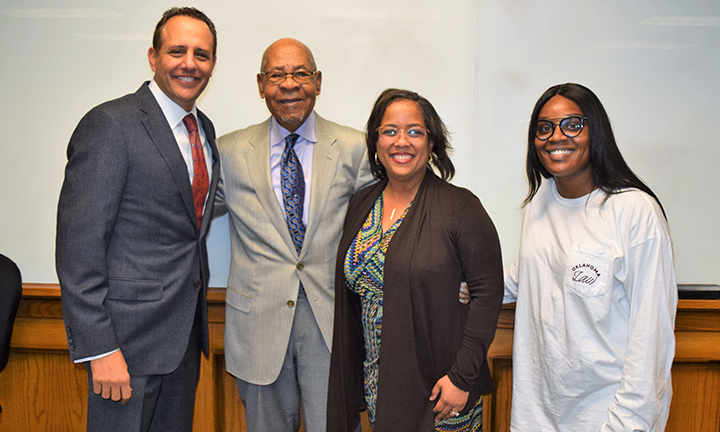 The event was hosted by the Black Law Student Association.

He also discussed the crucial influence attorneys had during the civil rights movement and emphasized to students the necessity of lawyers for maintaining liberty for the underprivileged.

Henderson joined the University of Oklahoma in 1967 as OU’s third full-time African-American faculty member. He and his wife, Barbara, were the first African-American couple to purchase a home in Norman.

Henderson founded OU’s Human Relations Department, which he chaired for 20 years, and from 1996 to 2000 was dean of the College of Liberal Studies.

He is a trailblazer among African-American university educators, an accomplished author, and he and his wife have worked tirelessly to mentor African-American students and foster human rights initiatives in Norman.

In recognition of his leadership in promoting diversity and equality, Henderson has received numerous awards and honors, including in 2011, the university’s highest honor, the Doctor of Humane Letters, as well as the David Ross Boyd, Kerr-McGee Presidential, Regents’ and Sylvan N. Goldman professorships. His other OU honors included the Regents’ Superior Teaching Award and the OU Alumni Association Distinguished Service Award. Other honors include induction into the Oklahoma Hall of Fame, the Oklahoma African-American Hall of Fame and the Oklahoma Higher Education Hall of Fame.