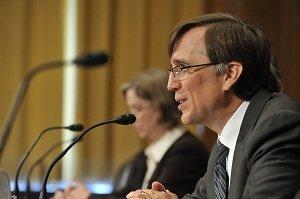 OU Law Professor Lindsay Robertson was selected as the first recipient of The David L. Boren Award for Outstanding Global Engagement.  This award was designed to recognize The University of Oklahoma faculty who has exhibited outstanding commitment to and support for the university’s international mission.

Professor Robertson has had a profound impact on the College of Law’s efforts to promote greater global engagement.  “His work to broaden the world of his students to comprehend the global community, to enhance their sense of participation in and capacity to contribute to global dialogue, is driven by his commitment to the vision, and not to his job description,” Dean Joseph Harroz said.

At the College of Law, Professor Robertson has been instrumental in developing exciting new classes that directly link our students with people around the world.  In 2000, he and Professor Brad Morse (then of the University of Ottawa) launched a videoconference seminar on Comparative Indigenous Peoples Law.   It was the first ever law school course allowing students from different countries to participate in real time, and now includes students from four countries.  In 2009, Professor Robertson started the International Human Rights Law Clinic at OU Law to participate in the United Nations Human Rights Council’s Universal Periodic Review (UPR) process.  Under the UPR process, each UN member state is required to appear in Geneva every four years to report on its record of compliance with international human rights law obligations, including obligations relating to the rights of indigenous peoples. Clinic students research the rights of indigenous peoples in a state coming up for review, meeting with both indigenous groups and government officials, and submit a report to the Human Rights Council.  Every report filed to date has been quoted by the Human Rights Council, and many of our students’ recommendations for state reform have been adopted by the Council.

Professor Robertson has also been one of the College of Law’s most active and visible international public servants.  He has been the Private Sector Advisor to the U.S. Department of State on a number of delegations and served as a member of the prestigious U.S. Department of State Advisory Committee on International Law from 2010 to 2012.  In 2004, he went to Damascus and Ankara to chair international meetings on water rights and monitoring.  In 2011, the U.S. Embassy in La Paz, Bolivia invited Professor Robertson to speak at law schools in La Paz and Sucre about indigenous law in the United States.  In 2011, he testified before the United States Senate Committee on Indian Affairs on “Domestic Policy Implications of the UN Declaration on the Rights of Indigenous Peoples.”  In April 2014, he co-hosted the U.S. Government and tribal organizations at OU Law for the only U.S. consultation with tribes prior to the next U.S. UPR appearance in Geneva.

Professor Robertson started at The University of Oklahoma College of Law in 1997 as a Visiting Associate Professor of Law, History & Native American Studies.  He is now a tenured professor, the Director of OU Law’s International Human Rights Law Clinic, Associate Director of the Inter-American Center for Law and Culture and the Faculty Director for the Center of the Study of American Indian Law and Policy.  Professor Robertson teaches courses in Federal Indian Law, Comparative Indigenous Peoples Law, Constitutional Law and Legal History.  He has also written numerous books, essays, and law review articles covering every aspect of Native American Law and Indigenous Peoples Law.