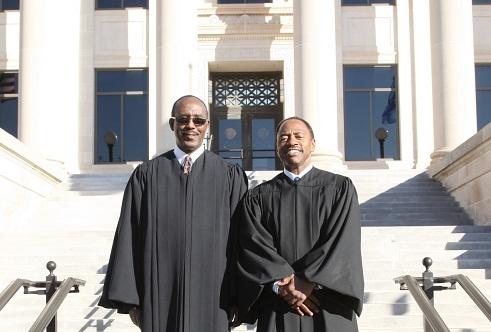 Through their judicial service on Oklahoma’s highest courts, two OU College of Law alumni continue to make history. Tom Colbert (’82) was sworn in January 4 as the first African-American chief justice of the Oklahoma Supreme Court. A few weeks later, on January 23, David B. Lewis (’83) was sworn in as the first African-American presiding judge of the Oklahoma Court of Criminal Appeals. Each was the first black person to serve on their respective courts when they were appointed, Colbert in 2004 and Lewis in 2005.

The two men attended law school at OU around the same time, in the early 1980s, and their careers have been shaped and surrounded by OU Law alumni. Both Colbert and Lewis were appointed by former Gov. Brad Henry (’88), an OU Law alum. Their predecessors are OU Law alumni – former Chief Justice Steven Taylor (’74) and former Presiding Judge Arlene Johnson (‘71). Four out of the five judges on the Court of Criminal Appeals are OU Law alumni. Three Supreme Court justices are also OU Law graduates.

Tom Colbert was born in Oklahoma City and graduated from high school in Sapulpa, Oklahoma. His athletic prowess in high school eventually earned him a full athletic scholarship in track and field at Kentucky State University, where he earned a bachelor’s degree in health and physical education in 1973.

Following college, Colbert served in the U.S. Army. After receiving an honorable discharge in 1975, he returned to school, attending Eastern Kentucky University and earning a master’s degree in education in 1976. He then worked as an eighth grade public school teacher in Chicago.

Following the advice of his grandfather, who told him education was the means by which to break the cycle of poverty, Colbert went back to school again. This time, he earned his juris doctor degree, graduating from the OU College of Law in 1982.

After law school graduation, Colbert relocated to Milwaukee and served as an assistant dean at Marquette University Law School. He served in that position for two years before returning to Oklahoma City to work as an assistant district attorney in Oklahoma County. In 1986, he entered private practice.

In 2000, Colbert was appointed by then-Gov. Frank Keating (’69) to serve on the Oklahoma Court of Civil Appeals. As the first African-American to serve on that court, Colbert began a tradition of making Oklahoma judicial history that continued when he became presiding judge in 2004. After serving less than a year in that capacity, Colbert again made history with his appointment to the Oklahoma Supreme Court in October 2004.

Outside of his Supreme Court responsibilities, Colbert participates in a mentoring program for young men and a summer reading program for children.  He is a frequent speaker at schools and still competes in masters track events.

David B. Lewis was born in Ardmore, Oklahoma, and graduated from high school there in 1976. He attended the University of Oklahoma and earned a bachelor’s degree in economics four years later. Lewis then attended OU Law, graduating in 1983.

Following law school, Lewis moved to Lawton, Oklahoma, where he entered private practice. In 1987, he became a Comanche County assistant district attorney, a position he held until 1991.

In August 2005, Lewis was appointed to the Oklahoma Court of Criminal Appeals. It was a history-making appointment to the highest court in the state of Oklahoma with appellate jurisdiction in criminal cases.

Lewis has received a number of awards and other public recognition over the years for his dedicated service to the legal community and the public. Elected by his peers, he served as president of the Oklahoma Judicial Conference in 2004. In 2008, he was chosen as a fellow for the Henry Toll Fellowship Program of the Council of State Governments, a leadership development program for state government officials.

In His Own Words: Caleb Stillwell Discusses His Path to OU's LAE Program

My experience in OU Law’s Legal Assistant Program was life changing. After graduating from college, I started working in sales and quickly realized that it was not a career I was passionate...